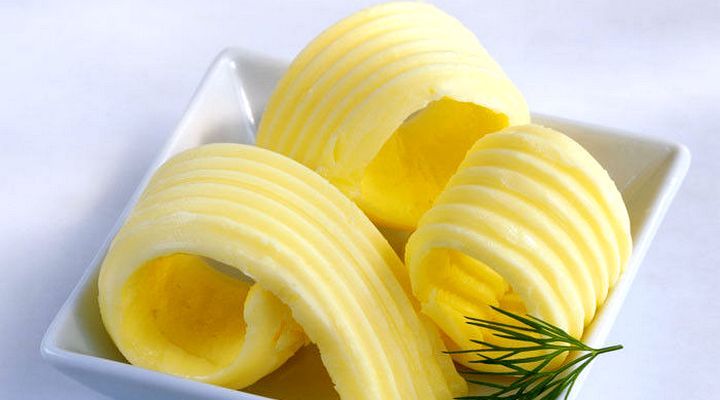 Margarine: Is a spread used for spreading, baking, and cooking. It was originally created as a substitute for butter in 1869 in France by Hippolyte Mège-Mouriès. Margarine is made mainly of hydrogenated or refined plant oils and water.

While butter is made from fat from milk, margarine is made from plant oils and may also contain milk. In some locales it is colloquially referred to as "oleo", short for oleomargarine.

Margarine, like butter, consists of water-in-fat emulsion, with tiny droplets of water dispersed uniformly throughout a fat phase which is in a stable crystalline form.  Margarine has a minimum fat content of 80%, the same as butter, but unlike butter reduced-fat varieties of margarine can also be labeled as margarine.Margarine can be used both for spreading and for baking and cooking. It is also commonly used as an ingredient in other food products, such as pastries and cookies, for its wide range of functionalities.

The basic method of making margarine today consists of emulsifying a blend of hydrogenated vegetable oils with skimmed milk, chilling the mixture to solidify it and working it to improve the texture. Vegetable and animal fats are similar compounds with different melting points. Those fats that are liquid at room temperature are generally known as oils. The melting points are related to the presence of carbon-carbon double bonds in the fatty acids components. Higher number of double bonds give lower melting points.

Partial hydrogenation of typical plant oil to a typical component of margarine. Most of the C=C double bonds are removed in this process, which elevates the melting point of the product.

Commonly, the natural oils are hydrogenated by passing hydrogen through the oil in the presence of a nickel catalyst, under controlled conditions. The addition of hydrogen to the unsaturated bonds (alkenes double C=C bonds) results in saturated C-C bonds, effectively increasing the melting point of the oil and thus "hardening" it. This is due to the increase in van der Waals' forces between the saturated molecules compared with the unsaturated molecules. However, as there are possible health benefits in limiting the amount of saturated fats in the human diet, the process is controlled so that only enough of the bonds are hydrogenated to give the required texture.

Margarines made in this way are said to contain hydrogenated fat. This method is used today for some margarines although the process has been developed and sometimes other metal catalysts are used such as palladium. If hydrogenation is incomplete (partial hardening), the relatively high temperatures used in the hydrogenation process tend to flip some of the carbon-carbon double bonds into the "trans" form. If these particular bonds aren't hydrogenated during the process, they will still be present in the final margarine in molecules of trans fats, the consumption of which has been shown to be a risk factor for cardiovascular disease. For this reason, partially hardened fats are used less and less in the margarine industry. Some tropical oils, such as palm oil and coconut oil, are naturally semi solid and do not require hydrogenation. 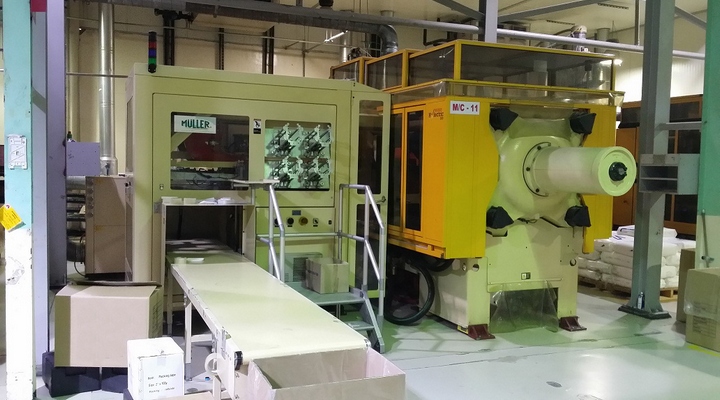 Modern margarine can be made from any of a wide variety of animal or vegetable fats, mixed with skim milk, salt, and emulsifiers.  Margarine and vegetable fat spreads found in the market can range from 10 to 90% fat. Depending on its final fat content and its purpose (spreading, cooking or baking), the level of water and the vegetable oils used will slightly vary. The oil is pressed from seeds and refined. It is then blended with solid fat. If no solid fats are added to the vegetable oils, the latter undergo a full or partial hydrogenation process to solidify them.

The resulting blend is mixed with water, citric acid, carotenoids, vitamins and milk powder. Emulsifiers such as lecithin help disperse the water phase evenly throughout the oil, and salt and preservatives are also commonly added. This oil and water emulsion is then heated, blended, and cooled. The softer tub margarines are made with less hydrogenated, more liquid, oils than block margarine.

Three types of margarine are common:

Many popular table spreads sold today are blends of margarine and butter or other milk products. Blending, which is used to improve the taste of margarine, was long illegal in countries such as the United States and Australia. Under European Union directives, a margarine product cannot be called "butter", even if most of it consists of natural butter. In some European countries butter-based table spreads and margarine products are marketed as "butter mixtures".

Butter mixtures now make up a significant portion of the table spread market. The brand "I Can't Believe It's Not Butter!" spawned a variety of similarly named spreads that can now be found on supermarket shelves all over the world, with names like "Beautifully Butterfully", "Butterlicious", "Utterly Butterly", and "You'd Butter Believe It". These butter mixtures avoid the restrictions on labeling, with marketing techniques that imply a strong similarity to real butter. Such marketable names present the product to consumers differently from the required product labels that call margarine "partially hydrogenated vegetable oil". 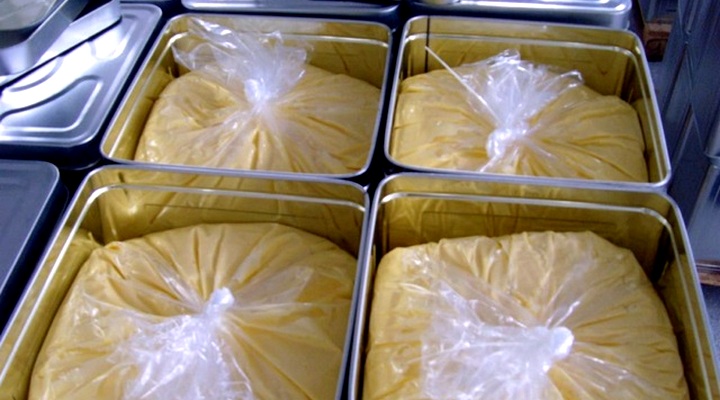 Discussions concerning the nutritional value of margarines and spreads revolve around two aspects — the total amount of fat, and the types of fat (saturated fat, trans fat). Usually, a comparison between margarine and butter is included in this context as well.

The roles of butter and traditional margarine (80% fat) are similar with respect to their energy content, but low-fat margarines and spreads are also widely available.

Vegetable fats can contain anything between 7% and 86% saturated fatty acids. Liquid oils (canola oil, sunflower oil) tend to be on the low end, while tropical oils (coconut oil, palm kernel oil) and fully hardened (hydrogenated) oils are at the high end of the scale. A margarine blend is a mixture of both types of components. Generally, firmer margarines contain more saturated fat.

There are two types of unsaturated oils: mono- and poly-unsaturated fats both of which are recognized as beneficial to health in contrast to saturated fats. Some widely grown vegetable oils, such as rapeseed (and its variant canola), sunflower, safflower, and olive oils contain high amounts of unsaturated fats. During the manufacture of margarine, some of the unsaturated fats may be converted into hydrogenated fats or trans fats in order to give them a higher melting point so that they are solid at room temperatures.

However, one type of Omega-3 fatty acid, alpha-Linolenic acid (ALA) can be found in some vegetable oils. Flax oil contains -to-% of ALA, and is becoming a popular dietary supplement to rival fish oils; both are often added to premium margarines. An ancient oil plant, camelina sativa, has recently gained popularity because of its high Omega-3 content (- to-%), and it has been added to some margarines. Hemp oil contains about -% ALA. Small amounts of ALA are found in vegetable oils such as soybean oil (-%), rapeseed oil (-%) and wheat germ oil (-%).

Omega-6 fatty acids are also important for health. They include the essential fatty acid linoleic acid (LA), which is abundant in vegetable oils grown in temperate climates. Some, such as hemp (-%) and the common margarine oils corn (-%), cottonseed (-%) and sunflower (-%), have large amounts, but most temperate oil seeds have over -% LA. Margarine is very high in omega-6 fatty acids. Modern Western diets are frequently quite high in Omega-6 but very deficient in Omega-3. The omega-6 to omega-- ratio is typically - to -. Large amounts of omega-6 decreases the effect of omega-3. Therefore it is recommended that the ratio in the diet should be less than 4:1, although optimal ratio may be closer to 1:1. 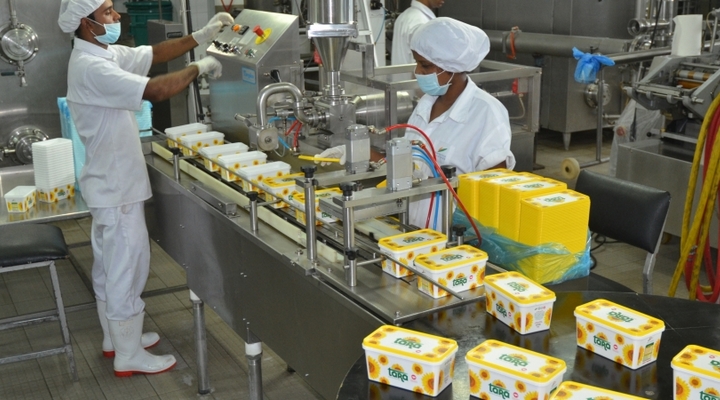 Several large studies have indicated a link between consumption of high amounts of trans fat and coronary heart disease, and possibly some other diseases,  prompting a number of government health agencies across the world to recommend that the intake of trans-fats be minimized.

In the US, partial hydrogenation has been common as a result of preference for domestically produced oils. However, since the mid-1990s, many countries around the world have started to move away from using partially hydrogenated oils.  This led to the production of new margarine varieties that contain less or no Tran’s fat.

Excessive cholesterol is a health risk because fatty deposits gradually clog the arteries. This will cause blood flow to the brain, heart, kidneys and other parts of the body to become less efficient. Cholesterol, though needed metabolically, is not essential in the diet. The human body makes cholesterol in the liver, adapting the production according to its food intake, producing about 1g of cholesterol each day or 80% of the needed total body cholesterol. The remaining 20% comes directly from food intake.

Therefore overall intake of cholesterol as food has less effect on blood cholesterol levels than the type of fat eaten.  However, some individuals are more responsive to dietary cholesterol than others. The US Food and Drug Administration states that healthy people should not consume more than 300 mg of cholesterol each day.

Most margarines are vegetable-based and thus contain no cholesterol. 100 grams of butter contains 178 mg of cholesterol.

Plant sterol esters or plant stanol esters have been added to some margarines and spreads because of their cholesterol lowering effect. Several studies have indicated that consumption of about 2 grams per day provides a reduction in LDL cholesterol of about 10%. 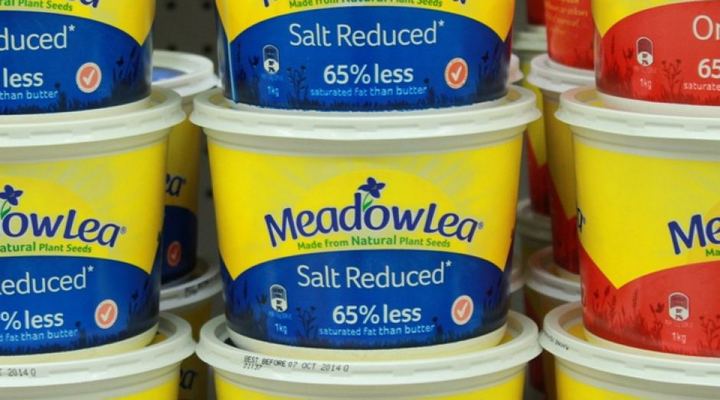 Margarine, particularly polyunsaturated margarine, has become a major part of the Western diet and has overtaken butter in popularity in the mid-20th century  In the United States, for example, in 1930, the average person ate over 18 pounds (8.2 kg) of butter a year and just over 2 pounds (0.91 kg) of margarine. By the end of the 20th century, an average American ate around 5 lb (2.3 kg) of butter and nearly 8 lb (3.6 kg) of margarine.

Margarine has a particular market value to those who observe the Jewish dietary laws of Kashrut. Kashrut forbids the mixing of meat and dairy products; hence there are strictly Kosher non-dairy margarines available. These are often used by the Kosher consumer to adapt recipes that use meat and butter or in baked goods that will be served with meat meals. The 2008 Passover margarine shortage in America caused much consternation within the Kosher-observant community.

Hydrogenated vegetable oil prevents margarine from melting and separating at room temperature.
Most margarine is normally made by making an emulsion of skimmed milk and vegetable oil. The first margarine was actually made of mostly beef fat. I, for one, am glad they changed the recipe. You can find more info at:

Margarine is made of vegetable oils which are obtained from plant fats and skim milk. These vegetable oils include corn, cottonseed, soybeans, and safflower seeds. To make margarine from vegetable oil, start by extracting oil from seeds such as: corn, canola or safflower. The oil is steamed to destroy antioxidants and vitamins.

To make margarine from vegetable oil, start by extracting oil from seeds such as: corn, canola or safflower. The oil is steamed to destroy antioxidants and vitamins. Next, the oil is mixed with a highly toxic substance called nickel, which acts as a catalyst. You will then put the oil in a reactor, under very high temperatures and pressure through a process known as emulsification hydrogenation. Emulsifiers are added to the oil so as to remove the lumps and the oil is steamed again. Bleaching is done so as to get of the grey color and synthetic vitamins and artificial colors are added.

Vegetable oils are made either cold-pressed such as olive and sesame, and they are also refined. Refined oils include safflower or canola.

There are a variety of oils that are used in food preparation and recipes. Vegetable oils are categorized as to their origin, and cooking temperature.
For more information about the formula  or how to cane Margarine/Butter contacts with our company’s account.