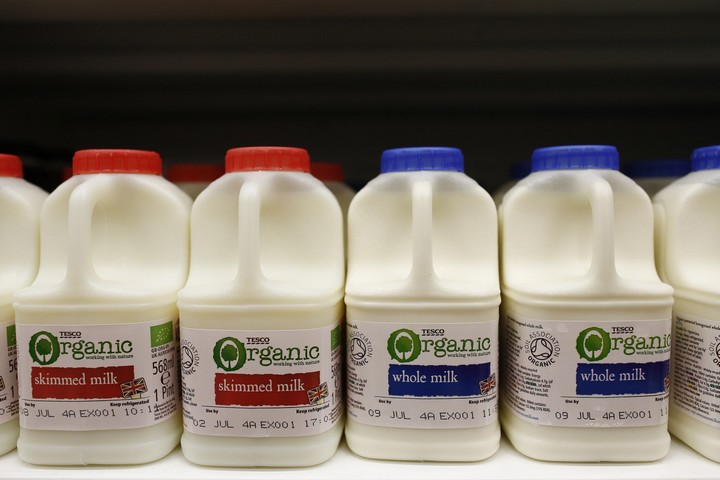 The reason it's called "whole milk" has less to do with its fat content, than the fact that it's comparatively unadulterated. As the Dairy Council of California puts it, whole milk is "the way it comes from the cow before processing."

While that's not entirely true, it does capture the gist of the justification. Whole milk is whole because it is — for lack of a better word — intact. "2 percent," "1 percent," and "nonfat milk" are not intact, because they've been stripped of some of their dairy fat, which makes them less creamy (and caloric).

The Food and Drug Administration allows milk sellers to call different varieties of milk by a range of names. Whole milk is, for instance, also allowed to be called, simply, "milk." Still, milk sellers have largely preferred to call and advertise milk as "whole milk," for unclear reasons.

Which is all fine and well. Except it isn't, because it's confusing.

Calling whole milk, "whole milk" conjures up rivers of cream. Whole milk doesn't come with that much extra fat. It has less than twice the amount of fat that 2 percent milk has, which isn't much to begin with -- less than 5 grams per cup. It's not even that much more caloric; it only has about 30 calories more per cup than 2 percent milk.

If the milk man is going to call reduced-fat milk "2 percent milk" and low fat milk "1 percent milk," he probably should call whole milk by its fat content — 3.5 percent — and not its relativistic name.

For that very reason, many grocers have mandated that skim milk labels include the word "nonfat." Otherwise, it might be time to consider switching 2 percent milk to "half milk," 1 percent milk to "a little-less-than-a-third milk," and nonfat milk to "zero milk."

Alas, poor whole milk has been reeling for decades. America's long-held anti-fat health narrative has left the country's marginally fatter milk to contemplate its doom. Whole milk sales fell below 14 billion pounds last year, a more than 61 percent drop since 1975, when they topped 36 billion pounds, according to data from the USDA. Over that same period, 2 percent milk sales have more than doubled, and 1 percent and nonfat milk sales have nearly tripled.

Americans have been drinking less milk, in general, for quite some time. But it wouldn't surprise me if whole milk's precipitous fall has, at least in part, come as a result of its misleading name.